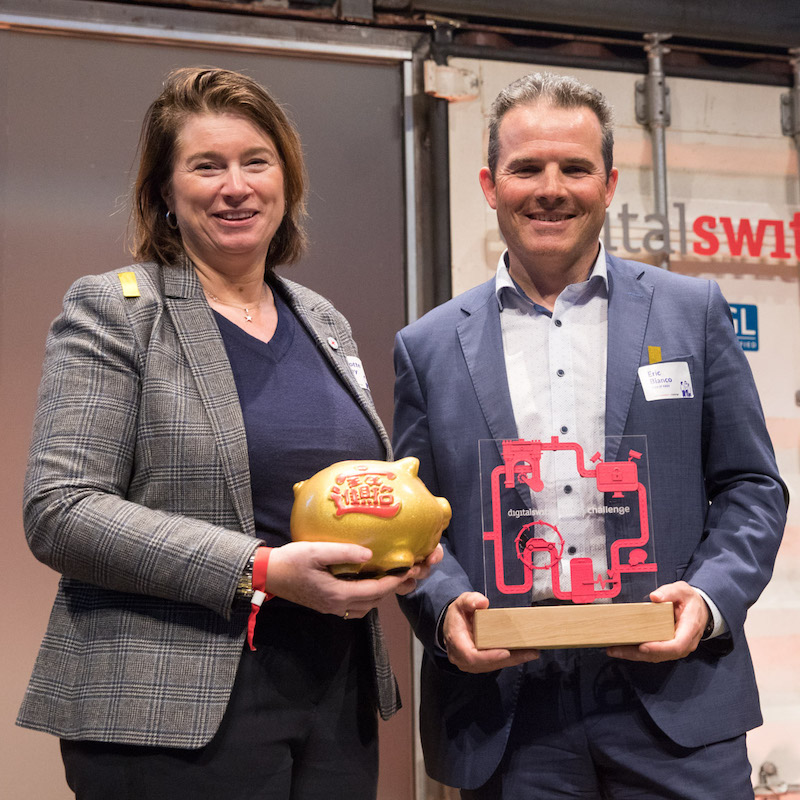 Final results proved surprising to insider pre-race predictions. The Valais bet, MountainPro – Digital Platform for Outdoor Professionals, was picked to have upset potential. While ICRC’s bet, Digitalization as Enabler to Re-Connect Families in Time of War, unexpectedly made an about-face. After conceding in January they were extending their timeline by 3 years, they disclosed to have solved three cases in which a missing person is identified through analysis of publicly available data, and took home the CHF 10K cash prize.”

As the jury visited the eleven bet teams’ demo stations in Kraftwerk, bet Captain Charlotte Lindsey-Curtet, Director of Digital Transformation and Data at ICRC, confided to me, “We were trying to see if we could use new technologies and publicly sourced data to find out the fate of persons separated from conflict by conflict. And yes, we were able to prove with the combination of different technologies – facial recognition, metadata, algorithmic reading on public data sets, we were able to find some matches.” Lest that be misconstrued as total victory, she quickly added, “However, we’re not ready yet to scale that.”

A few steps away at the Valais bet’s demo, Office Chief, Eric Bianco, proudly told me and local media covering the event, “We hear a lot in society about the problems of administrative hurdles. The MontagnePro project demonstrates the capacity to deliver fast administrative requirements, so companies and people can focus on developing their own business instead of going through barriers.”

Eric believes “being entrepreneurial is a quality of mind. You don’t have to be launching a startup to be innovative and think of ways to do your work better. It’s a goal of our administration to think about how we can provide the best services. In the end, the entrepreneurs are the one that create value, and we need, as an administration, to support them.” Hours later, his office’s outlook and actions would be rewarded by the jury as co-winner of 2018/19 challenge.

Challenge godfather, Stefan Schöbi, Head Engagement Migros Development Fund, elaborated in a Nov. 2017 post, “Who will finish in the money?“ the real end-game of the Challenge race. “We want Switzerland to become the leading global hub in digitalization. For Switzerland, it’s all about our contribution. Because this Challenge is not about marketing, this is not a communication thing. This is about action.”

Managing Director digitalswitzerland, Nicolas Burer, echoed similar feelings as we stole a quick time-out before team presentations got underway. I asked him what’s different in 2019 compared to the first Challenge initiative launched three years ago. “Today, as it has been since the beginning, it’s not about new start-ups. It’s not about a company having a standalone project —we’re looking for collaborative AND cross-industry innovation.”

Pressing for specifics what kind of innovation and what types of collaboration, he said, “It has to be something not on the market yet as a product or service. We are not copying a startup. We don’t want to compete against a member. Something really new, that’s the first point. Second point about collaboration, it has to be at least three: companies, institutions, academics or a non-profit organization, working together on the project. At least three partners.”

As we were talking, bets begun 12 and 24 months ago were upstairs showcasing their amazing results. Knowing some of the new entries (see Open Challenge Bets Ready To Race) anticipated timelines of 24, even 36 months, I was curious what Nicolas considers an ideal timeframe. He replied, “Some of them might be done after six months, but taking three, four years. It’s too long. A timeframe of 12 months is a good one. What will happen after 12 months depends on the partners. They might create a new association, like Riva Digital. They might create a new company, like daura Ltd. They might want to integrate it into one of the partners. They might want to stop it of course. But we want the first 12 months to be very collaborative.”

One of my picks to win this season also came from Swiss Romande. Consciously or not, Nicolas might have been citing the bet, Green Label for Data Centers, as an ideal example to position Switzerland as the leading global hub in digitalization. Over the past months, Bet Captain, Monica Gilles, Director Suisse Romande at Hewlett Packard Enterprise, has been a willing source to share her team’s journey, as she phrased it, “to boost the Swiss economy in a sustainable way.”

I spoke to Monica prior to her stage presentation. She allowed there’s no “magic” formula to creating innovation. But as I drilled down in, Betting Green Clouds to Combat Climate Change, she does believe, “… the formula is to have clear problem statement, to have clear result in mind and have program coordination. And with project planning and a clear design thinking initiative, we were able to go from one idea to an execution.”

Sustaining Switzerland’s prosperity is the stated objective of digitalswitzerland and popular initiatives like the Challenge. Likewise, jury members, Claudia Bienentreu, Kati Gentinetta Political Philosopher, Jordi Montserrat Co-founder & Managing Partner Venturelab and Patrick Griss Executive Partner Zühlke Ventures, placed a premium on bet’s influencing Switzerland’s attraction as a global hub for digitalization. Guiding their scoring 1) was the bet team committed? 2) did they achieve an outcome? 3) was their bet a lighthouse example for Switzerland? 4) did they make an impact on society?

According to those criteria, all eleven bets who completed their runs on April 15thdeserve to wear a winners’ jersey. As do many more unheralded teams who started in 2017 and 2018 — but failed to finish for reasons obvious or still obscure. Will the 2019 bets be able to live up to the high expectations and national interest the Challenge race now generates?

Nicolas is optimistic. “I think this program is unique and I’m looking forward to a 4th edition of eleven new bets next year.” For those newcomers with big dreams, high hopes and a rambling story how they intend turning a good idea into a winning bet, Nicolas has some good news. He said, “We do two kinds of support. The first one is networking the bets with new people. We are on continuously connecting the single bets with other members, experts, or people in Switzerland.”

Acknowledging a common grievance among teams without sufficient skills or budget to DIY or hire communication experts, he continued, “And the second one is on the communication side. We are now ramping up for every bet a new program, a new way of helping communicate the bets.”

Narrating 30 Challenge story posts since 2017, I’ve been humbled by remarkable women and men. They are the Challenge players who willingly give up holidays, weekends, after hours socializing, time with their kids, partners and friends – to work on long shot bets for the good of their country, helping ensure the abundance we all inherited, will be intact for future generations.

This is my final post for digitalswitzerland (unless my mandate is renewed;-). A sincere shout-out of gratitude to everyone I’ve met, interviewed and collaborated with on this epic journey. You have all given me invaluable gifts of perspective to understand complex subjects so I could turn them into creative narratives that make people care and know what’s at stake. THANK YOU!