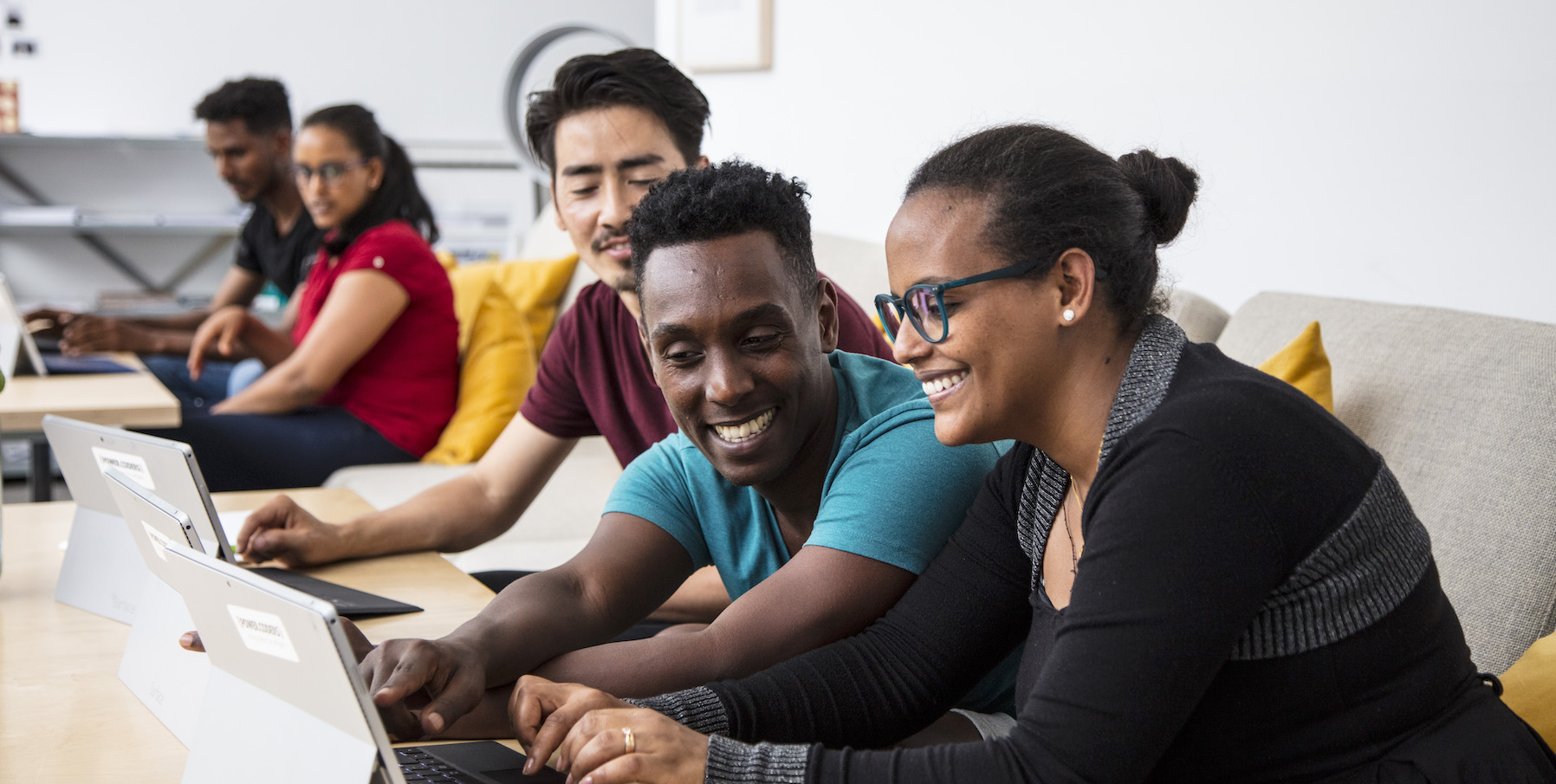 Over 70.5 million refugees in the world. Millions of vacant IT jobs due to digitalisation. Two problems, one solution: A coding academy for refugees. This has been Powercoders’ mission since they recruited their first class of refugees in 2017.

The Powercoders programme is open to refugees with high potential for a career in IT. Since its launch, more than 118 people have followed the association’s programme. All participants start by attending a 13-week IT course that focuses on the basics of web development and prepares the students for the next phase: practical internships. These are offered by over 80 participating IT companies, including Swiss Post, UBS, Swisscom, Mobiliar and Cognizant. The Powercoder (student) receives support from a coach throughout the 6 to 12-month internship. The goal is a full-time position, an apprenticeship, or a trainee programme combined with part-time studies.

“Every day when I left my house, I was unsure if I would get back in the evening.” These are the words of Izzatollah Amani. The 26-year-old was forced to flee his home country Afghanistan but was able to take refuge in Switzerland. Here, he started a new life quickly by learning German and completing two trial semesters at the ETH Zurich. However, he wasn’t allowed to continue his studies. He applied for technical schools but was not admitted as he was unable to provide the necessary documents from his university back in Afghanistan.

Fortunately, Izzatollah heard about Powercoders and was selected from 120 applicants for the first intake in Zurich. After the 3-month Powercoders boot camp he was chosen by the IT company Cognizant in Zurich and successfully completed a 12-month internship. He was offered a permanent job as a junior software engineer immediately afterwards.

Today, Izzatollah is still at Cognizant part-time – the rest of the time he’s able to continue his studies in computer science at the Fachhochschule Rapperswil. For Izzatollah it’s a dream come true: he does not need to claim welfare, he studies in the field he loves and – best of all – he resides in a country where he is safe at last.

His employer is also delighted with Izzatollah’s success. “As an IT company we struggle to find qualified talent in the market,” says Stefan Metzger, Country Manager of Cognizant Technology Solutions AG. “When we heard about Powercoders we were excited about working with an organization that would enable us to develop people in-house whilst also giving individuals an opportunity to ‘re-start’ their professional life and regain their dignity. Izzat is the first ex-Powercoder to stay on as an employee and we couldn’t be more proud that he is now also able to study and follow his dreams.”

It may read a bit like a fairytale but Izzatollah’s is not the only success story. Fellow-Afghan Jamila Amani, who completed the programme in 2017, is now a System Engineer at Swisscom AG. Another graduate from 2017, Sri Lankan Gajendran Packiyanathan, works as a Software Engineer at Migros Aare. Meanwhile, Rami Jumaah, from Iraq, is the first Powercoder to have graduated with an EFZ (apprenticeship diploma). He is now working as a Performance Engineer at Firmtec. These stories are just a few examples of the many Powercoders who have turned their careers – and lives – around. And all before the age of 40 or even 30.

The numbers speak for themselves: so far over 118 refugees have taken part in the Powercoders programme, with 97% finding internships and over 60% successfully managing to secure job integration. This proves that Powercoders’ concept works in practice. Stefan Metzger would encourage more IT firms to get on board:

“We strongly recommend this programme to all IT companies and we look forward to developing more talent together with Powercoders.”

Powercoders is also committed to helping the next generation of IT specialists and is developing its school concept further. To offer more stability and safeguard the programme’s continuation, the organization has set up two permanent schools, one in Zurich for the whole German-speaking part of Switzerland and one in Lausanne for the French-speaking part. The association has also built an international organization to scale the impact of its programme worldwide (starting with Europe and the MENA region). A first pilot has already taken place in Istanbul, a second is now running in Turin, Italy, and other international intakes in the EU are in development.

As part of the digitalswitzerland Challenge, Powercoders has pledged to establish two “Powerhouses” (in Lausanne and Zurich) by April 2020. These brimming community hubs should make learning digital skills accessible to people of diverse backgrounds including refugees, children, parents, IT professionals, and social entrepreneurs. By 2021, these Powerhouses will have become sustainable and will generate collaborations and projects as well as train new professionals for all of Switzerland.

When people hear about our mission, they want to help too. There are two main ways to get involved:

Contact for companies in German-speaking part of Switzerland: hussam.allaham@powercoders.org

Contact for companies in French-speaking part of Switzerland: magaly.mathys@powercoders.org